To strengthen the co-operation and exchange between companies from Shanghai and Macao, the Macao Trade and Investment Promotion Institute (IPIM) and the Shanghai Council for the Promotion of International Trade jointly held the Shanghai-Macao Business Matching Session at 10 am today (3 June), the first day of the “Macao Week in Shanghai”. Around 110 entrepreneurs from various sectors including trade, food/product wholesale and retail, e-commerce, tourism and hotels, attended the event. A total of 96 meetings were arranged during the session, covering topics such as wholesale of food souvenirs and wine, retail of high-quality goods, and food and beverage business co-operation, facilitating further the co-operation between companies from the two cities in expanding the market together.

IPIM President Lau Wai Meng noted in his speech that the Yangtze River Delta and the Guangdong-Hong Kong-Macao Greater Bay Area, the regions where Shanghai and Macao are situated, are the most economically vibrant regions in China and offer broad prospects for co-operation; comprehensive and multi-layered connections have now been established between Shanghai and Macao. Through this matching session, IPIM seeks to give Shanghai entrepreneurs a deeper knowledge of featured quality products from Macao and Portuguese-speaking countries and foster deeper co-operation between both cities. In the meantime, IPIM also welcomes Shanghai entrepreneurs to invest and run businesses in Macao through the Investor’s “One-stop Service”, and to utilise Macao’s strengths to further explore development and market opportunities in the Greater Bay Area.

Yu Chen, Vice President of the Shanghai Council for the Promotion of International Trade, said in his speech that Shanghai and Macao are closely in line with national strategies, such as the Guangdong-Hong Kong-Macao Greater Bay Area and the integrated development of Yangtze River Delta, and that now is the perfect time to carry out effective collaboration between the two cities. He hopes the matching session will take the Shanghai-Macao business exchange and co-operation to the next level, thereby creating more room for joint development towards the prosperity of the two regions.

During the session, IPIM representatives introduce the participants to Macao’s investment environment and IPIM’s services. Macao enterprises took the opportunity to showcase and offer a taste of their products at the event. Consultation services were also offered via video calls on-site for participants to ask questions about running businesses in Macao. A total of 16 online and on-site enquiries of the Investor’s “One Stop Service” were received, covering the establishment of various businesses in Macao, such as asset management, red wine import, travel agency services, organisation of large events, processing of chemical engineering materials, importation of tablet press machines, and silk trade, as well as the city’s business environment.

Heiman Sou, General Manager of the participating Macao enterprise Sardinia Macau, mentioned that he exchanged ideas and forged connections with six local buyers of toiletries and from online and offline integrated shops, and preliminarily agreed upon co-operation with them on items including cutlery, aroma products and soap. He anticipates that, if the co-operation between both sides actually commences, the value of the orders will be five to ten times greater than that received in Macao. During the exchange, he also shared information that the minimum order required for commissioned production in Portugal is smaller than that in Mainland China, and such flexibility is favoured by entrepreneurs who joined the matching session.

Luo Fei, Marketing Manager (International) of the Shanghai Tianxiang & Chentai Pharmaceutical Machinery Co., Ltd., a participating enterprise from Shanghai, said that the company intends to open a branch in Macao, and one of the factors taken into account for this move is Macao’s close connection with Portuguese-speaking countries. Hoping to “go global” using Macao as a platform, the company participated in the matching session, during which they gained a basic understanding of the city’s business environment and established initial contacts using the video-call consultation services provided on-site. The company will subsequently step-up its matching efforts for further business communication.

The Macao SAR Government has progressively launched a series of “Macao Week” events in Mainland China, including the “Macao Week in Shanghai”, which is held for five consecutive days from today (3 June) to 7 June along the Yuanmingyuan Road Pedestrian Street at Waitanyuan, Huangpu District in Shanghai to showcase the multifaceted charm of Macao under the “gift box” theme. For this event, IPIM has organised a 22-strong Macao delegation and arranged for nearly 40 Macao enterprises of made-in-Macao products, Macao brands and agents of Portuguese-speaking countries’ products to display and sell a wide array of items, including pastries, coffee, black tea, alcohol, olive oil, jam, canned sardines, curry paste, apparels and health foods, promoting Macao enterprises and enhancing their brand popularity by various means. In addition, the “Macao Week in Shanghai – Macao Tourism and MICE Promotion Seminar” organised by the Macao Government Tourism Office and IPIM will be held at 10 am on 4 June.

The Shanghai-Macao Business Matching Session was held on 3 June 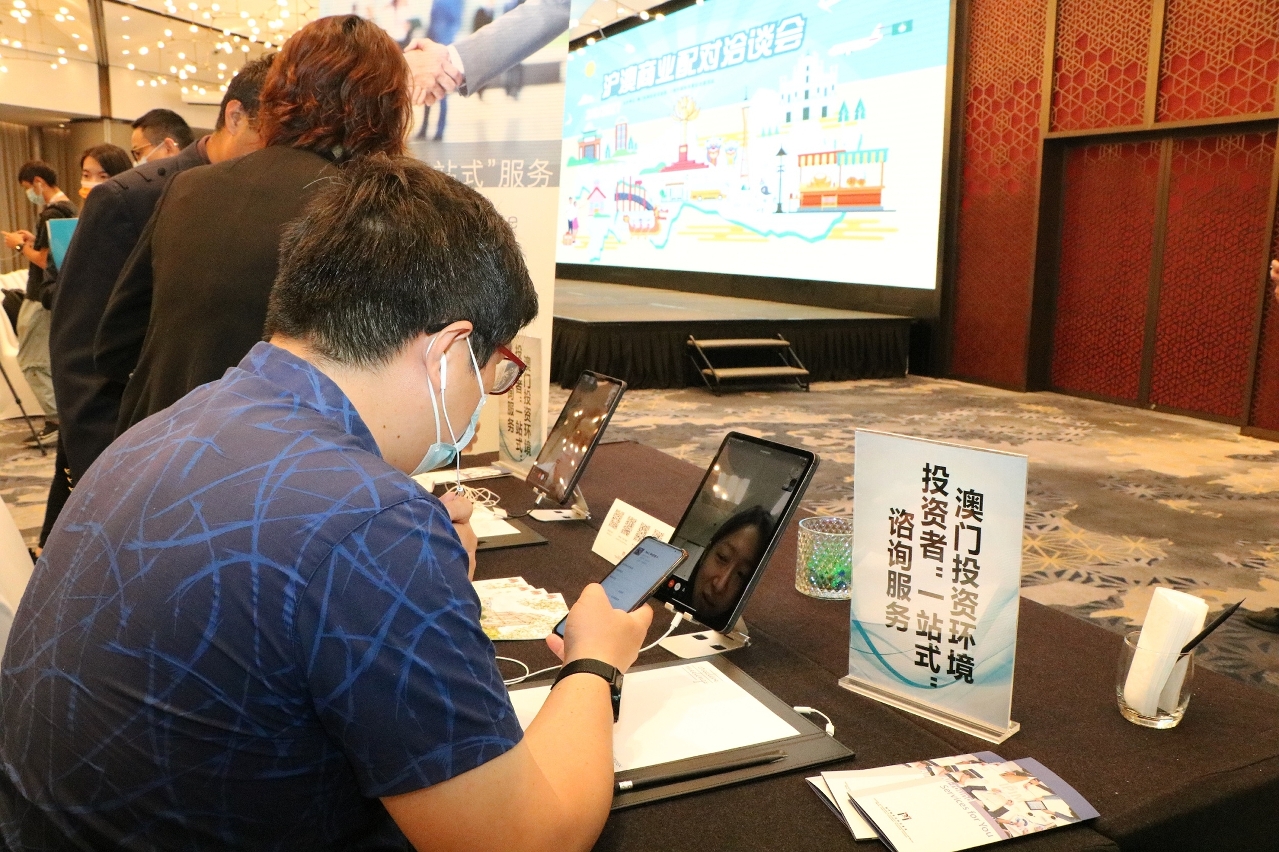 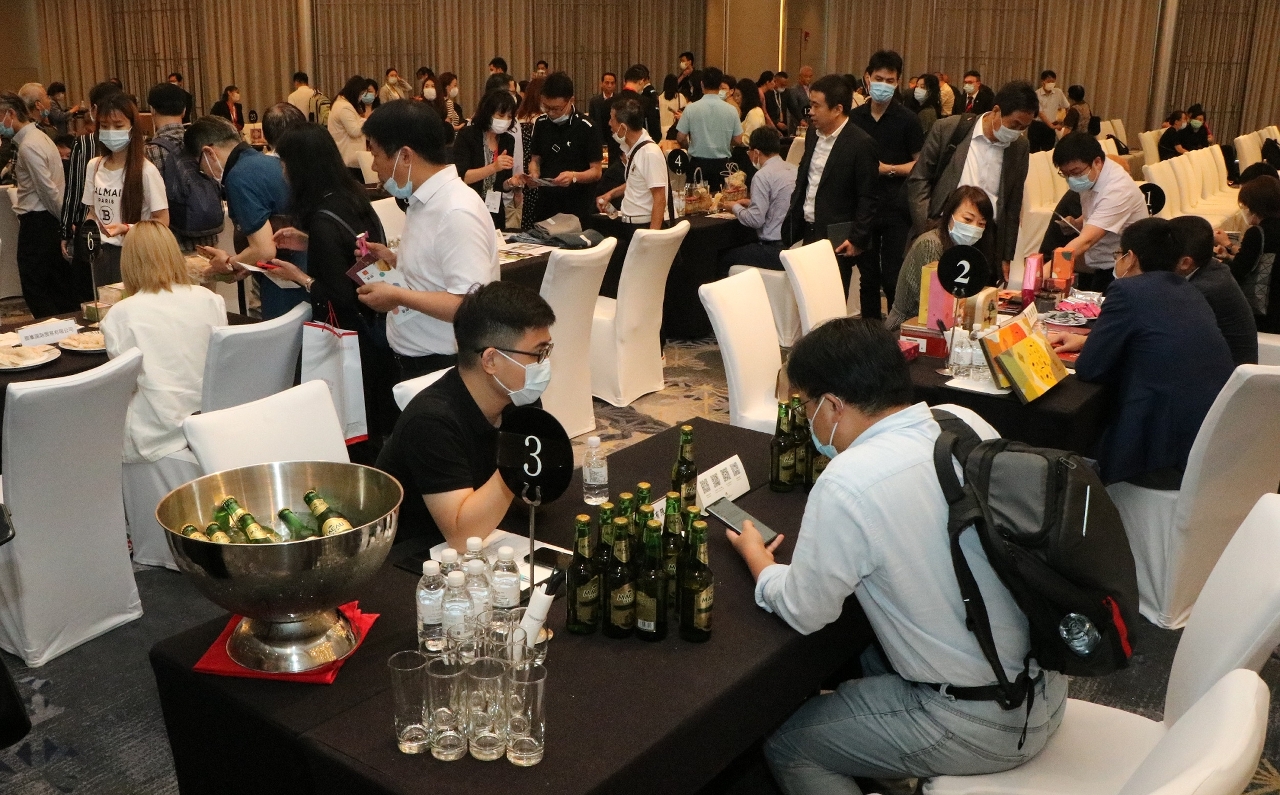 Around 110 entrepreneurs participated in the Shanghai-Macao Business Matching Session