Known to “rapidly stop bleeding and relieve pain”, Cheong Kun Pain Reliever Oil is in the first-aid box of many households in Macao and gives a helping hand in treating burns, scalds and bruises. With the philosophy of “manufacturing with integrity”, the half-a-century-old Cheong Kun Pain Reliever Oil from Macao has developed into a Chinese medicine brand that has won the acclaim of many customers from home and abroad. 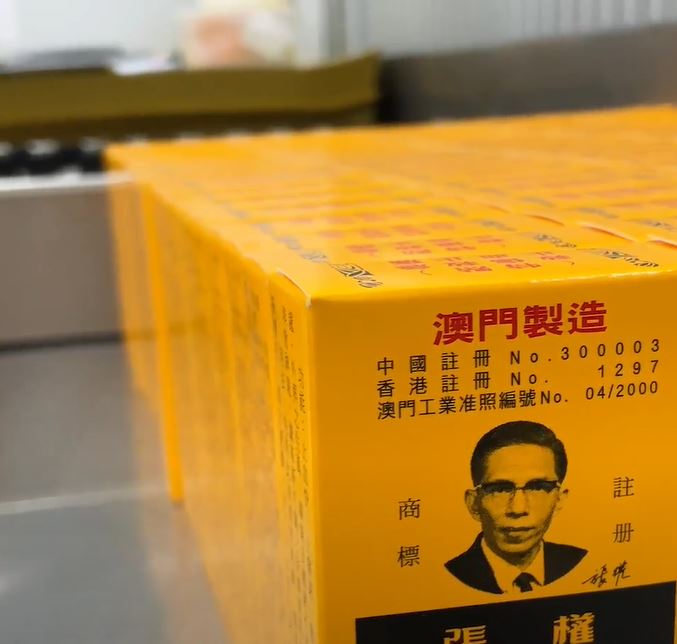 Cheong Kin Nang, Chairman of Fábrica de Medicina Chinesa Cheong Kun (Cheong Kun Chinese Medicine Factory), recalls that his father Cheong Kun was so obsessed with traditional Chinese medicine that he often bought books to learn by himself and became an apprentice to Chinese medicine practitioners. In the early 1950s, Cheong Kun opened a clinic to provide medical treatment to people who suffered fractures, strains and pain symptoms. He later developed a medicated oil formula which purely consists of Chinese medicines, hoping to help people heal their injuries, and named the product ‘Cheong Kun Pain Reliever Oil’. In 1997, Cheong Kin Nang took over the company and elevated his father’s business to the next level.

Cheong Kin Nang emphasises that the product is made purely of Chinese medicines without any chemical substances, and uses a mild formula that does not irritate the skin. Applying the oil on the affected area can help expedite the healing process, regardless of burns, scalds, festering sores, bleeding wounds or painful joints. The oil is proven to be most effective in stopping hemorrhage. Cheong recalled a traffic accident that involved a friend of his years ago. The injured was bleeding heavily, and his other friend immediately ran to a pharmacy to buy a bottle of Cheong Kun Pain Reliever Oil, applied the medicine on the wound and waited for the ambulance together. When the paramedics arrived at the scene, they were surprised to see the wound had already stopped bleeding. To further prove its effectiveness, Cheong invited Nanfang Hospital in Guangzhou to test and analyse the product. The results revealed that, well known among the older generations, the medicated oil is indeed an effective cure for pain symptoms and bleeding. Keeping an Eye on Portuguese-speaking Market while Manufacturing Locally

Given that new regulations for local pharmaceutical production were promulgated by the Macao SAR Government after the handover, the company set up its factory in the city’s Toi San district in 2000 to facilitate sustainable business development. The factory has been sophistically divided into sections, which include the raw material warehouse, cleaning zone, filtering zone, filling zone and packing room to ensure every stage of the manufacturing process is carried out in strict compliance with quality control protocols. However, the limitations posed by the factory’s current floor area and facilities have made it extremely difficult to follow the GMP standards and. As a result, Cheong Kun Pain Reliever Oil is unable to be exported to Mainland China. In recent years, many peer manufacturers have opened factories on the mainland to cut costs. But “Cheong Kun Pain Reliever Oil is a local brand and must be produced in Macao, and we have never thought about relocating our factory to the mainland so far’, said Cheong Kin Nang. Nonetheless, the brand is still favoured by many mainlanders, who travel to Macao to buy the product. With the faith in the culture of tradition Chinese medicine, which has been passed on for thousands of years, the company believes that the traditional Chinese medicine industry has great potential in the mainland market.

Thanks to the unique advantage of Macao as the Commercial and Trade Co-operation Service Platform between China and Portuguese-speaking Countries, the company successfully exported Cheong Kun Pain Reliever Oil to Mozambique in 2018 with the help of the Guangdong-Macao Traditional Chinese Medicine Science and Technology Industrial Park in Hengqin. The company hopes that this move will serve as gateway to other Portuguese-speaking countries. 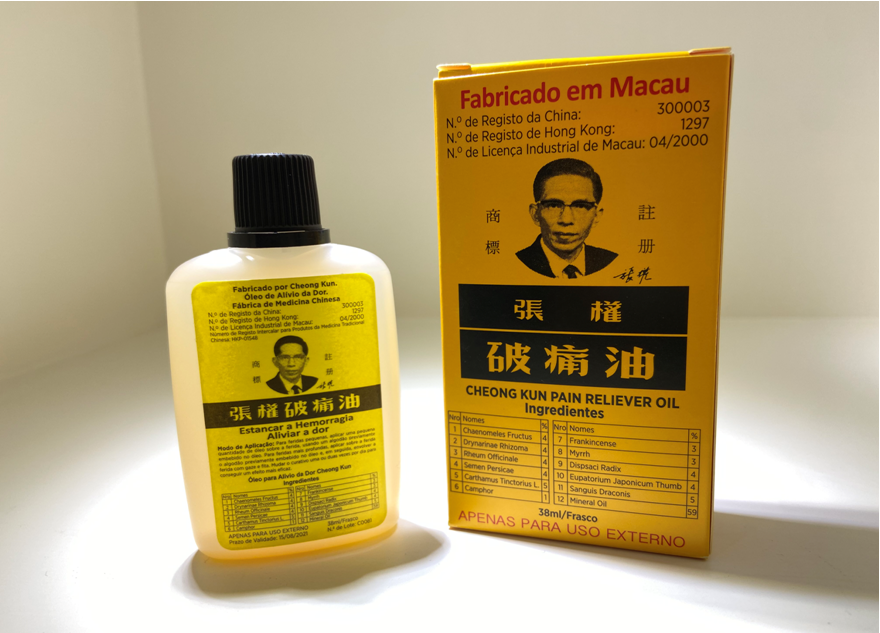 Products with a notable reputation can easily become targets of lawbreakers. Having noticed counterfeit products in several regions including Hong Kong and Singapore in the late 1960s, the company has registered the portrait of Cheong Kun as the trademark of the oil in Mainland China, Hong Kong and Macao to protect the rights of the brand more effectively.

Cheong Kin Nang frankly said that the current laws in Macao have placed restrictions on the sale of medicines to such an extent that has somewhat limited the marketing process. Nevertheless, thanks to the Macao products display centre “Macao Ideas” established by the Macao Trade and Investment Promotion Institute in recent years, the company has seen Cheong Kun Pain Reliever Oil gaining exposure among local and overseas buyers and agents, and people started contacting the company after visiting the website of “Macao Ideas” to discuss business deals. Joining “Macao Ideas” helps the brand in marketing. 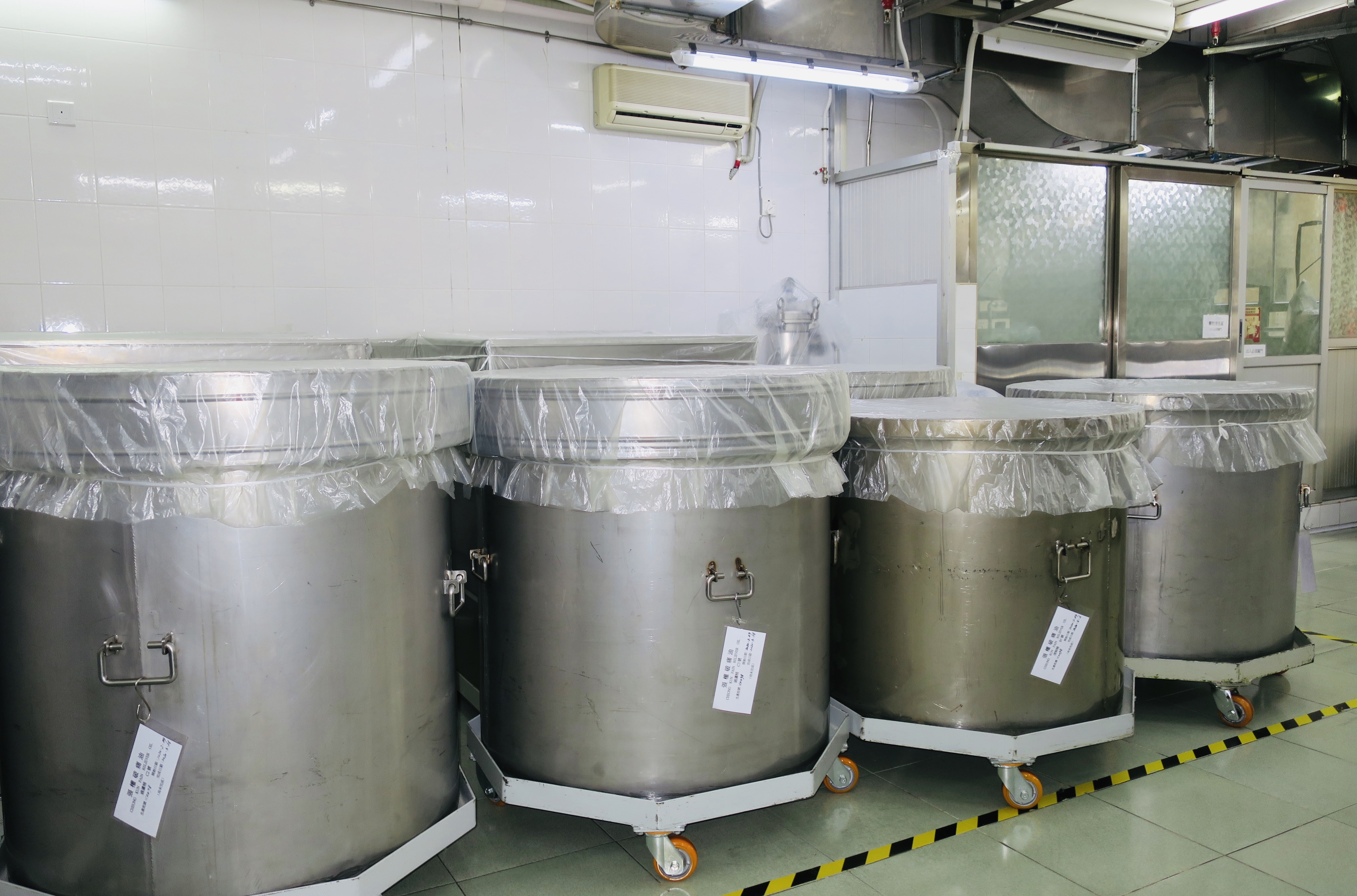 The big iron barrel for producing the oil Over half a centry, Cheong Kun Pain Reliever Oil has been adhering to the principle of “guaranteed quality” and has a name for itself in Macao. Cheong Kin Nang is now training his son, Cheong Lok Kei, as the third-generation company leader for the sustainability of the brand. According to Cheong Lok Kei, the product will be further developed and more varieties will be launched, such as spray, roll-on bottle and in travel bottle to reach different customer groups. In the meantime, the company will also strive for the GMP certification to enter mainland and overseas markets. The company will strive for the GMP certification in the future